The PCR EUPHEMIA algorithm developed by N-SIDE is used every day by power exchanges and market participants in 26 countries across Europe to trade electricity and capacity across borders and zones.

In this case study, we’ll detail the history, inner workings, and results of the EUPHEMIA project.

PCR (Price Coupling of Regions) is a collaborative project operated by nine European power exchanges. The goal of the project is to develop a single price coupling solution for calculating electricity prices on a day-ahead basis across Europe in order to achieve the EU’s goals of European energy market integration.

Developed by N-SIDE on behalf of the Nominated Electricity Market Operator (NEMO) members of PCR, the algorithm is used to calculate energy allocation and electricity prices across 26 European countries. Since 2014, EUPHEMIA has successfully maximized overall social welfare and increased the transparency of energy price and flow computations in Europe.

Without market coupling, cross-border capacity and electricity have to be purchased separately in a complex multi-step process. Market coupling solves this problem using implicit auctions.

In an implicit auction, market participants only bid on electricity, and cross-border capacity is allocated by power exchanges during the price calculation process.

This has the effect of optimally allocating and pricing cross-zonal transmission capacity between market areas, which in turn maximizes social welfare. In addition, market coupling prevents the artificial splitting of markets and provides the most relevant price signals for investment in cross-border transmission capacity.

Seeing the benefits of market coupling, European authorities pushed for an SDAC solution that would unite the European electricity market. Now, realized through the work of the SDAC project (which is composed of European NEMOs and TSOs), the result is a single market that maximizes trading and generation efficiency, promotes competition, and increases liquidity.

The success of COSMOS’ state-of-the-art approach — as well as our unique combination of business, analytics, and software expertise — made N-SIDE the top choice for expanding market coupling throughout Europe.

For the next few years, N-SIDE developed new capabilities for the algorithm, which was renamed EUPHEMIA. These new capabilities included support for Italian PUN orders and complex orders used in Spain, Portugal, and now Ireland, as well as more advanced grid modeling like HVDC ramping.

In 2014, the new algorithm was launched in Northern and Western Europe (NWE region), covering both CWE and the Nordic countries. The program has since expanded to 26 countries. 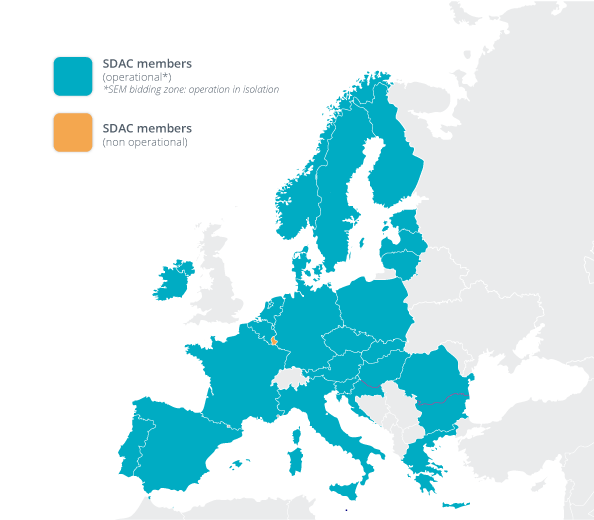 Thanks to its solid foundation, EUPHEMIA has run flawlessly since launch. N-SIDE still supports and maintains EUPHEMIA, offering a dedicated hotline service for customers.

In addition, a comprehensive research and development program called the EUPHEMIA Lab enables us to evolve the algorithm in response to new market design requirements and performance challenges.

The underlying problem involves advanced “non-linear” constraints and some variables that can only take integer values, making it particularly challenging.

We tackled this problem using decomposition methods, in which a main search looks for the best matching of orders that satisfy various constraints, then checks for candidate solutions if all the various price requirements can be enforced. This is a highly customized version of a “branch-and-cut” algorithm, capable of tackling a large-scale, mixed-integer, non-linear program.

For a detailed look at the inner workings of EUPHEMIA, read the public description.

Thanks to its advanced design, PCR EUPHEMIA is a highly efficient algorithm. It solves market coupling problems containing hundreds of thousands of orders and thousands of block, smart, and complex orders in less than 17 minutes, meeting the high-performance requirements of all stakeholders for SDAC.

Most importantly, EUPHEMIA has achieved the goals of the EU and PCR by increasing liquidity, efficiency, and social welfare, and enabling better usage of generation and transmission resources.

PCR EUPHEMIA by the numbers

N-SIDE operates the EUPHEMIA Lab, an ongoing R&D project for upgrading the algorithm that began in 2019.

EUPHEMIA Lab has already delivered high-impact results that have enhanced the scalability and efficiency of the algorithm. These enhancements include:

EUPHEMIA has also been proposed as a solution for single intraday coupling and will be used to execute intraday auctions for the pricing of cross-border capacity in the future.

N-SIDE is a deeptech company that empowers organizations in the energy sector to make better decisions and optimize the use of critical resources.

We’re doing so by combining deep industry expertise with applied mathematics and artificial intelligence into easy-to-use and cutting-edge software that transforms uncertainty and complexity into deterministic outcomes.

In Energy, we accelerate the transition toward renewables and electrification by enabling leading grids and market players in making better, faster, and safer decisions with machine learning and mathematical optimization technologies.

Contact us to learn more about our power matching services.